A network of squatters formed in Cardiff

Hello, we exist now. A network of squatters, travelers, the unrooted, homeless people, and supporters.

We’re now meeting monthly and are hosting our first event, a Squatters/Travelers Workshop & Skillshare on Thursday 20th December at 3pm, venue to be confirmed. This will be an hour discussing the law around squatting, recent changes, and how to still squat legally in commercial  buildings. Followed by another hour skill-sharing how to secure and occupy spaces to live in.

We are currently organising events, planning projects, plotting against further criminalisation, setting up a squatters estate agents, and creating a support network for people currently squatting and for others interested in doing so.

Contact us at cardiffsquatters@riseup.net to get involved.
Find us at http://www.cardiff.squat.net to stay updated.
Love & Rage!

We’ve added a few new polls to the opinion polls page, or see below, so let us know what we’ve done well, or could do well, and how long you think we’ll be around for…

If you come along to both, you’ll get free prizes, keep an eye out on these event pages for more details as they arise.

So, it’s been a while since the last one. But following the success of our last gig and our excellent queer night we will be hosting another open musical gathering.

Entry is completely free, although donations are welcomed (£3 suggestion) and any donation will go towards running the space or potentially towards anti-deportation and animals rights groups such as the hunt saboteurs.

Some free food will be provided, bring some with you to share. Bring your own beverages but particularly foolish drunkenness won’t be tolerated. Anyone is welcome to play, send a message if you’d like to be added to the posters. Keep an eye out here for acts as they appear.

For those of you who don’t know, really really free markets are groups of people who form temporary markets based on the idea of a gift economy. This means that no money exchanges hands, people create things out of passion and give them freely whilst also taking what they desire and need from others freely. Everything is free!

Who’s got the control?? 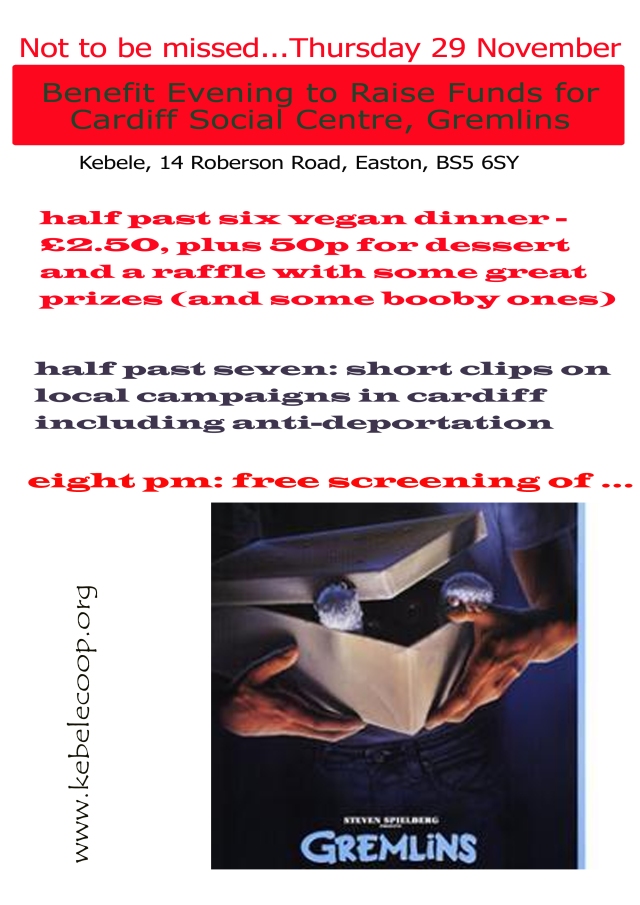 Queer Dance Party! Celebrating a month of resistance in Cardiff 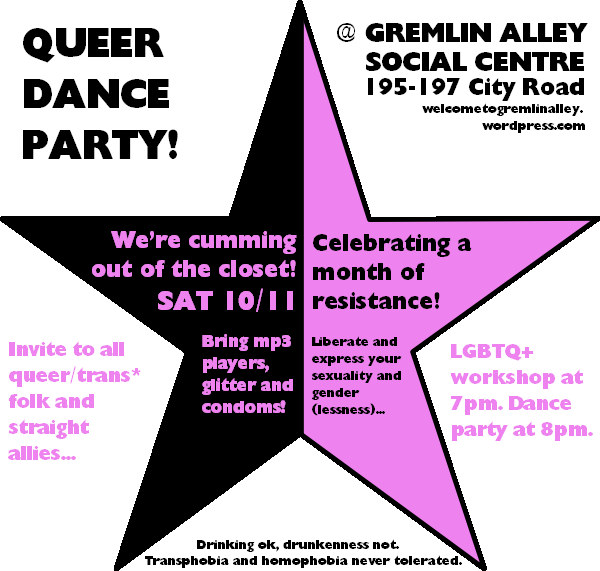 Gremin Alley Social Centre invites all queer/trans* folk and straight allies to a dance party this Saturday to celebrate a month of resistance in Cardiff, including us gremlins averting eviction.

As a social space occupied by quemlins (queer gremlins), we encourage you to liberate and express your sexuality and gender(lessness); whether you’re openly a gender-bender or fist-deep in narnia – or elsewhere for that matter.

There will be an LGBT+ workshop starting at 7pm, focusing on terminology and understanding, followed by a discussion. Then from 8pm we will be celebrating queer culture in Cardiff (and everywhere else).

As previously stated, us gremlins expresses our full support and solidarity with Mrs Saleh and her two children who faced forcible deportation. Our thoughts are with the Saleh family and those who resisted over the last week. Love & rage.

Timeline of resistance from Bristol Indymedia:

The Saleh family, Mr S and her two children,  arrived in the UK in November 2007 after suffering  15 years of violence in Egypt. The whole family is now under serious threat of honour-based violence and possibly even death. They had a court hearing on 13th November to receive a fair hearing of their case, but this was completely ignored by UKBA.

The first attempt to deport the family was on the morning Thursday 18th October, which resulted in the family’s home being raided by UKBA officers in Cardiff and two activists being arrested for ‘obstructing UKBA officers’, one of which additionally charged with ‘obstruct pc’. While a call-out was made for supporters to attend Cardiff Bay police station, where the family were taken in order to be transfered to a coach for a flight later that day in London, others made their way to the motorway sliproad. What followed was an attempt to run down activists blockading the road.

The rest of the day was spent showing solidarity for the two arrested comrades, whilst others networked by all means possible calling for support nationally. The call out was well received, with texts, emails and messages circulated to target Egypt Air responsible for the comercial flight. This resulted in their helpline, reservation and effectively their ‘back-up’ telephone lines being clogged up and eventually disconnected, successful vandalism of their facebook wall, with a status update ackknowledging the discruption to the attempted deportation.

Fortunately, due to a security mix-up, they were driven to a detention centre near Gatwick Airport called Ceders avoiding the 3pm commercial flight. As the good news spread, both activists were later released to a crowd of supporters outside, and the campaign to Save the Saleh Family grew.

By the morning, Friday 18th October, it had been noticed by many activists that UKBA offices, within General Building on Newport Road, had received half a dozen smashed windows –presumably in response to the attempted deportation of a loved and well-respected family within the community of Cardiff.

With a limit of 72 hours (3 days) to detain the family before deportation, and the weekend lacking flights to Eygpt, immigration minster Mark Harper authorised an extention of 7 days detention for the family; rather than extending their stay long enough for their court hearing on 13th November. A charter flight was then booked for the morning of Wednesday 24th. In response Mrs S slit her writs and the bathroom was flooded in blood. She wrote with the blood on the walls that she only wants to save her children.

What followed was an injunction granted by the judge responsible for the case the same evening, resulting in UKBA successfully persuading the judge to cancel the injunction – ignoring lawful procedure of appealing. However, anti-deportation activists had already mobilised from Wales and England to resist the deportation, meeting up overnight near Crawley in an attempt to blockade the detention centre where they were being held.

A massive police operation (see video), with more than 50 police vehicles, was then carried out involving police weilding batons and setting dogs on protesters. While one person was hospitalised, another managed to attach themself to the underside of a bus, effectively blocking the exit. The person who was under the bus was then cut off and arrested for aggravated trepass, while the coach was successfully delayed for 5 hours, resulting in the detaines missing their chartered 8am flight.

By the morning, supporters had gathered outside the police station where the arrestee was being held, while contact had been lost with the Saleh family. Due to lack of contact, and inability to resist another deportation due to the unknown location of the family, Mr Saleh, Ibrahim and Lyal, were then deported the following morning, Thursday 25th.

That same morning, in Cardiff, it was noticed that UKBA had received increased damage to their property, including more broken windows and slogans spray-painted ‘No Borders’ and in Welsh ‘Dim Ffiniau’. Leaving no doubt in the minds of UKBA officers as to why their officers had been targeted.

A protest has now been organised by the Save Saleh Family Campaign for this Saturday 27th October at 11:30am, meeting at the Aneurin Bevan Statue, Queen Street to protest the UKBA’s immoral and unjust removal of the Saleh family. Bring banners and messages in support of the family!

Solidarity with all migrants – resist deportations!

“last night fire erupted in the tranquillity of bristols well-to-do redland area, targeting a marked vehicle of Standfast Ltd. besides the usual functions that led us to attack a company invested in “security” (as always, securing the sanctity of private property in mass society) one of their many cctv contracts in bristol, bath, avon, somerset and gloucestershire is both state and private schools, where as you can read in the newspapers even the toilets are no escape from the cameras.

daily submission under impersonal institutions rarely comes naturally. after the nuclear family, the education system at all stages is instrumental in adapting the free child to the civilized world of workplaces, malls and (other) prisons that todays youth are destined for. constant surveillance has proven a most effective step in this domesticating process, kids learning to selfregulate under the assumption that they’re permanently being watched, and this has been made to seem normal by reality tv, the saturation of control technology in the dead synthetic urban enviroment (supplied by the likes of Standfast Ltd.), and the atomised crowd of a generation filled with selfish fear of punishment or repremand.

but it is often still the young people who are least destroyed by this onslaught and who still find themselves impelled to refuse the system (like the riots last summer and scattered moments of revolt everyday since and before). this is just a reminder – WHEN YOU HIT A LENS IT WILL BREAK LIKE ANYTHING ELSE! so shouts to  youth rebellion against society, the claimants of the recent attack on security vehicles in nottingham, and everyone else committed to the timeless crime of freedom!

strength for Gustavo Quiroga, held in immigration detention after the Delta squat eviction in Thessaloniki, and for the Gremlin Alley resisters in cardiff!

strength for the anarchists non-cooperating with the grand jury in the american northwest, and for the ones who fled from it!

strength for the street fighters held for the march29 battles in Barcelona, and Carolina whos accused of burning a Starbucks that inspiring day!

anarchy here, now and always — yours in war, counter-surveillance cores.”